It’s been a week of two halves. Initially, the first half lasted two days, while the second was longer. That’s the way with halves. Never the same. Dull and foggy, followed by bright sunshine and fresh easterly breezes. I made great headway in emptying out the glasshouse, got my spuds and tomatoes planted and enjoyed more cycling in one week than the entire month of March. Nights are still cool, so I’m ever watchful of the many tender plants outside, but I’m moving safely towards last frost date.

Here we go again for the last Saturday of April. Read along for a bit of fun, a small amount of useless information, some nostalgia and preparations for an upcoming world event.

This week one of my two Aurinia Gold Ball rockery plants is in bloom. Notice how I phrased that very carefully. Interestingly, there’s a second one that is way behind and not likely to get to this stage for another month or so. It would be very unusual, but not unheard of, to encounter one of the two Gold Ball rockery plants way behind. I wonder why is this? I wrote about this five years ago, explaining how the process of flowering and setting seed works. I think I should put a disclaimer with it, stating that all opinions are my own. I may be talking through my hat.

I’ll do two things as soon as flowering has finished. Firstly, I’ll trim the plant back very carefully with my sharp new secateurs, all the while adhering to the new Safe Thumb Positioning Policy. Secondly, to contradict above, I’ll leave one corner untouched in order to allow seeds to ripen. It’ll be somewhat like a number two haircut with a bobble. The seeds will be collected, dried and grown in the Autumn. I believe it’s also possible to propagate Aurinia from softwood cuttings taken in May. Therefore, I’ll use some of the trimmings to make more. Double-jobbing.

Aurinia was formerly known as Alyssum. Taxonomists recently moved it to a new family. I don’t know what it is they know that prompted the poor thing to be expelled and re-classified, so when I discovered this trickery on Tuesday, I was moved to investigate further. I read lots of information that is quite useless to me, but I’m happy to note that the plant is not liked by deer. I can now safely take down garden walls on all sides.

Fifty plastic pots arrived from Dublin last week. Each one had contained a rose, and the pots were offered free of charge. My friend collected them for me and now they are filled with Dahlias and Begonias. I have removed the top shelf to fit these bigger containers. I’ll be planting some of my tomatoes inside as soon as I’ve got a chance to remove all the shelving from the other side.

Hey presto, voilà! I’ve managed to move seed trays and plants to the other side and the shelves have been removed. The shelving will be used on the patio. To improve drainage I’ll put all the summer pots on them, rather than directly on the ground. The tomatoes and cucumber are in their final summer position, and I await an early crop this year. I have some tumbling tomatoes that will go in pots outside, but that will wait for a further week or two.

Someone mentioned recently that it’s like musical chairs, all this moving things around from month to month. That’s exactly what is necessary in a very small space.

3. Not Very Interesting At All

I inserted a few twigs of fuchsia to deter birds from enjoying a dust bath. The twigs were cut last Autumn and kept for this purpose, but guess what happened? When inserted in soil, the twig that was cut almost six months ago has sprouted! Surely, you’ll agree that’s interesting? This was not meant to happen!

This photograph does not do justice to the beauty of the bluebells. They were not my choice for planting back in 2016, but they’re growing on me. They are definitely worth a short paragraph.

About ten years ago I gave a budding cyclist my second bike for a few months. She had joined our local cycling club and was studying for her Leaving Certificate exams if I am not mistaken. Towards the end of that summer she returned the bike, together with a gift of this apple tree. I wonder how did she know that I was into gardening, and I wonder did she know that I might be writing about the episode a decade later? Therefore, continuing my policy of renaming plants whose real name is unknown to me, I hereby christen this lovely tree Malus April Dolan. Dolan was the make of the bike, red and much loved. Many years later, as I moved along up the bike ladder to a much-more-loved bike, I gave Dolan to my cousin, and it continued to ride the roads of West Waterford until very recently. During my time in the saddle, its career highlight was the ascent of Alpe d’Huez in July 2006. We did not set any time records, Dolan and I. Later the same day I crashed and broke my little finger lúidín, caused by an over-zealous Frenchman. Right hand, same as last week. I could do up an injury CV, so I could.

The tree has matured to give me much pleasure and summer shade. I did think that the night frosts of the last two weeks would damage the emerging blossom, but it seems to have come through the hardship with flying colours. A bit of hardship is character-building.

I’ve decorated it betimes with Christmas baubles, and resolved to broaden my decorating skills this year. The broken belt buckle is significant in this regard. I’m informed that next Saturday is World Naked Gardening Day and I’ll be putting my best foot forward. I shall not name my two informants.

There are over two dozen broad bean plants growing well on the vegetable bed at the back of the garden. Some were sown last autumn, while others are spring babies. As you’ve probably guessed, this one is from Autumn and I’ve potted it and put it among my patio plants. You could say that it’s a put-pot-patio-plant. I keep thinking that the flowers are eyes looking at me. I’m thinking it would be best to throw a blanket over them next weekend!

Sin a bhfuil uaimse don seachtain seo. I’ll be back again next week with another Six-on-Saturday. Thank you for reading, and to Jon for getting us all together every week. Have a good week. Slán go fóill. 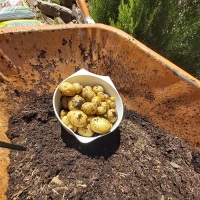 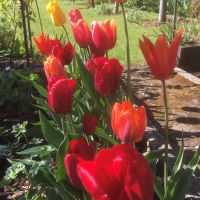 Ready for Six-on-Saturday. There's five here plus one more. Last week I was waiting for the opening of travel restrictions and visiting beautiful gardens. This week, I'm realising that beauty is on my doorstep. The link will be live tomorrow in my Smart Bio. ⬆️↖️
Just checking on the peas. Delighted to see them growing so well. #movealong
Here we go again for the last Saturday of April. Read along for a bit of fun, a small amount of useless information, some nostalgia and preparations for an upcoming world event. Link is in my SmartBio. ⬆️↖️
I wonder is it a marketing ploy? Do plants with female names sell better than Bishop's Children, Sweet William, Bachelor's Buttons, Rosa Just Joey or Cotoneaster Tom Thumb? I can't imagine Tom being up to much in the company of the distinguished ladies.

learning, growing, and learning more -- life on the Olympic Peninsula